Paddy Hanna ‘The Hill’ Interview: The Story Behind Every Song

Talking about their ex badly? It could be a red flag.


Back in the beginning of 2018, we named Irish songwriter Paddy Hanna an Artist To Watch ahead of his great sophomore album, Frankly, I Mutate. With standalone songs like “Camaraderie” and “Austria” alongside his debut Leafy Stiletto, Hanna had already garnered a bit of critical love in his homeland. Then, after seeing him live in Dublin and catching new songs like “Bad Boys,” he got our attention, too. He’s a wonderfully idiosyncratic musician, crafting songs that could have something classicist and occasionally straight-up Old World to them, but filtering them through a modern disposition, with scenes of life around 21st century Ireland as well as honest, bare reckonings with depression.

Now, Hanna’s back with a third album called The Hill, an “internal musical about how the past and present exist at the same time in our minds” as he put it upon the album’s announcement back in the spring. “It deals with the struggles of mental health, the sometimes difficult search for happiness, and the moral conflict of growing up in Catholic Ireland,” Hanna added then. “Most importantly however, I just wanted to put the past behind me on this record, I wanted to leave it on the hill. I hope you enjoy my therapy.”

As he did on Frankly, I Mutate, Hanna teamed with Girl Band’s Daniel Fox as his producer and bandmember. (Girl Band drummer Adam Faulkner also remains in the band.) Together, they’ve now made an album that’s altogether stranger and darker than Hanna’s recent work. Operatic Scott Walker-isms of the past have now been replaced by guttural Tom Waits-ian freakouts like “Cannibals.” Much of The Hill is also more atmospheric and meditative, whether in the jangly currents of “A Strange Request” or the airy memory fog of “My Ladybird.” At times the album swells with orchestral drama, as on the opener/overture of “Last Of Their Kind” or the weathered brightness in the vaguely Britpop-esque closer “Colosseum.”

It’s at the end of the album where Hanna might reach some kind of sense of peace. After bleaker moments through the middle of the album — the stormy “Nameless,” the eerie “Sinatra” — Hanna allows a bit of acceptance with “Colosseum.” Before that, though, there’s also The Hill’s surprising highlight “Jog On Shall We.”

An ambling spoken-word track, “Jog On Shall We” is equal parts banal and profound, quirky and poignant. “I wasn’t expecting to make a journal entry today, but I thought, why on Earth not?” Hanna says at the beginning. What follows is creaky seaside sounds and what Hanna himself admits is not “an especially prominent day.” Small scenes and observations around town mingle with meditations on life. There’s something about it that seems to sum up what Hanna does as a songwriter, and what The Hill does as an album: Amidst trials big and small, days climactic and meaningless, there’s a sense of pushing forward and learning how to navigate the general mess of the outside world. “But that’s all in the past, let’s jog on shall we?” he offers at the end.

Now, The Hill has arrived. Ahead of its release, Hanna provided some notes on inspiration and recording for each of the songs. Read along and check out the album for yourself below.

The moment I finished demo’ing this track I knew it was an album opener. It plays like an overture but none of its musical themes return throughout the album, which is fittingly misleading I think.

I wanted to play a showy solo on a Chromatic harmonica for the song’s breakdown, but in the end we opted for a modest clarinet solo which Daniel Fox performed, a move which I reckon helped the song’s balance. A wanky harmonica solo would have messed it right up.

We move from misleading overture to angry embittered rant. I wouldn’t say this song is anti-religion — my relationship with Catholicism is not what I would call a ruined one. It is more an account of the various episodes in my life where damaged people in my life wore religion like a sordid mask.

Not that this was originally my intention, mind you. At one point this song was called “The Video Recordings Act” and would have dealt with the video nasties era in Britain during the 1980s. I had also intended to somehow ask film journalist and author Mark Kermode to perform double bass on the track, before realizing this idea was niche even by my standards.

An isolation love song. As sad as it may sound, loneliness can sometimes be what we need. I’ve often been lonely and found myself breaking out into a dance, as though I were being moved by an unknown force. It’s a strange thing.

By the way, convincing Daniel that the Glockenspiel line belonged in the song was not easy, and it was a pain in the ass to play. I didn’t play it mind you, Daniel did. Oh, the irony!

Here’s a fun fact for you, the title of this album was originally meant to be named after an individual I knew growing up, a person dismissed as a freak and boogeyman character in a time when poor mental health in Ireland was something many families locked away or shunned. I mentioned the proposed album title to a relative of mine who then proceeded to completely lose it: “Paddy, if this person’s family find out you’re naming an album after them they will burn your fucking house down.”

I was completely taken aback by this reaction. My intention was to pay tribute to someone who was unfairly treated by the society around them. But to hear even the suggestion that their family would rather let them die forgotten than to be venerated to some degree was truly sad. The fact that people still thought this way made things even sadder to me.

In order to prevent any unnecessary violence I, rather cowardly, changed the album title and dedicated this track to the nameless everywhere who were shunned for being different. It was the least I could do.

A sort of spiritual sequel to “Nameless,” here we have a protagonist who has pushed away the one they love, through self-destruction and an unwillingness to accept happiness. Unknowingly, or perhaps knowingly, guilt plays a part in this destruction, the guilt of having been an innocent child who took the words of fools as gospel.

I wonder how many of us in society — and I’m speaking of Irish society here — reflect poorly on the misguided words of embittered clerics, the hateful bile of the ignorant, or the unknowing mistrust that often came with being an island nation in the early ’90s. These cruelties should not be forgotten, but in the case of our protagonist, the unfair guilt needs to be released in order to see the beauty the lies in front of them.

This song was the least hassle to record. It’s probably the most bread and butter number on the whole album.

Daniel Fitzpatrick got to play his big guitar line on this one. I think he played through two valve amps at full volume and went for it. Despite recording in an isolated seaside bungalow, there were people on neighboring islands that probably heard it.

I love chord organs. Ever since hearing “Walking The Cow” by Daniel Johnston I had to get one. The percussive noise of your fingers hitting the keys when you record with them just sounds great to me, and that’s what you’re hearing on the track.

I was given an Italian chord organ from a friend as a gift. It was built in the early ’60s and I was really rather taken by its sound, a sort of airy creakiness. When I sat down to play it for the first time I wrote “Sinatra,” which is I suppose a sort of Italian murder ballad. I’m not sure why I would write such a song, to be honest. I may have been in a vengeful mood, or perhaps the chord organ had some dark secrets and wanted to channel them through my fingers! We may never know.

This track really put Jilly (Redmond, vocalist) to task, she had to sing what were essentially uninterrupted vocal lines for as long as she could without stopping. You must understand that the backing vocals on this track were intended to sound inorganic, so if you heard her stop and start panting it wouldn’t have had the desired effect. Mind you she was a trooper and pulled it off.

The song, by the way, is not about Prince Andrew.

I remember there was a bit of in studio tension while recording the acoustic guitar on this track — not that we would ever come to blows, we are all sweetie pies. If I recall, Daniel Fox felt my style of playing was too “pop folk,” like I was trying too hard to be emotional rather than just playing naturally. I disagreed and there was a brief but catty exchange of words. We were both pissy with one another for a short spell but all was forgotten soon after. Incidentally, this is my favorite sounding track on the record. So there.

I had originally intended for this to be the album’s closer, but opted for something chirpier to end on a more optimistic note. The percussion you hear as the song fades in are two pieces of firewood being lightly hit on the slates of a driveway. Adam Faulkner performed this outside surrounded by mics while smoking what I’m told was a cigarette.

The original demo was around two minutes and 30 seconds and was entirely stream of consciousness lyrically. Daniel was particularly taken by this demo and insisted we pad it out and add more lyrics. Most of the original improvised lyrics remain in the track, but of course I won’t tell you which ones, because I am a fiend.

You probably don’t know this but I worked for a year as a tour guide for a Dublin company called Viking Splash. This involved dressing like a Viking and giving high energy tours while driving around in a decommissioned US all-terrain vehicle, which was painted yellow for some reason. Anyways I thought it would be cute to record a version of “Jog On Shall We” where I performed my entire Viking Splash Tour while the lads jammed along. The finished version was 17 minutes long. We didn’t use it in the end.

As mentioned earlier, I opted to close out the album on a more optimistic note, to let the listener know that there is some catharsis here. There may be strange living down by the colosseum, but we adapt, we grow, and hopefully we prosper. Part of me still thinks I should have ended on a grim note, but what’s done is done.

Incidentally, “Colosseum” was the first track the four of us played together during a weekend jam session in Cork. It’s the song that set the tone for the whole album. So well done “Colosseum,” you done good. 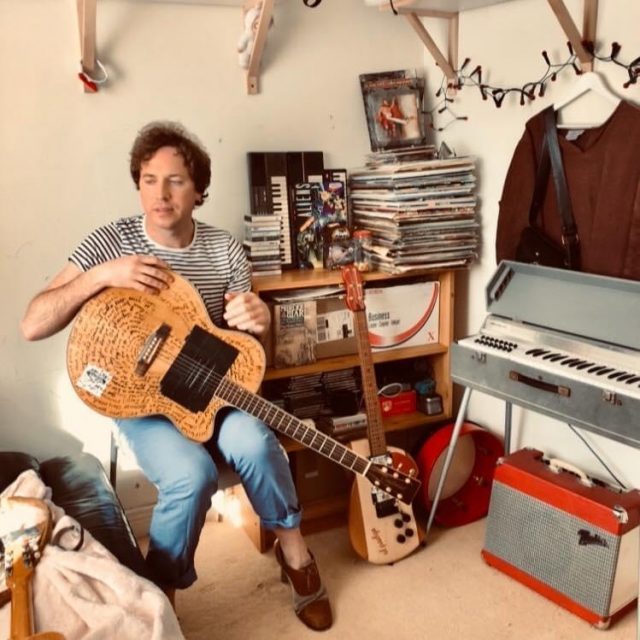 The Hill is out now via Strange Brew.

Talking about their ex badly? It could be a red flag.

The costs of waiting for an easy way to quit smoking

Ask An Ex – Episode 3: How Rosa Quit Smoking with the CBQ Method + Her Quit Smoking Tips You Can Do in Quarantine

Resetting app and badge after smoking for a week, after having been smoke free for a little over a month. I hope this time is the last.